Yurt the Silent Chief is a character in Demon's Souls.

Yurt is initially found in the Tower of Latria (3-2). He will be held inside an "elevator cell" and ask for the player's help. If the player frees him, he will then appear in the Nexus and claim to have no business with them yet. He is an assassin, so after a while the player will find two unidentified bodies in the Nexus. If the player doesn't attack him then, he will eventually start killing NPCs, like Freke's and Urbain's followers, eventually attacking the player. To keep NPCs alive, the player must kill him as soon as the first two bodies appear or earlier. He will drop the Gloom Set, which has high poison/plague resistance, and can help the player in 5-x. 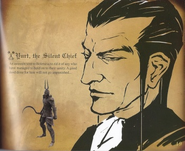 Add a photo to this gallery
Retrieved from "https://demonssouls.fandom.com/wiki/Yurt_the_Silent_Chief?oldid=17273"
Community content is available under CC-BY-SA unless otherwise noted.