Yuria the Witch is a character in Demon's Souls.

Yuria is located in (1-3). To save her, the player will have to complete most of 1-3 to get a key, backtrack to 1-2 to obtain another key, and finally disguise yourself as a Fat Official by using the Official's Cap (Official's Set in the remake) to gain access to the area she is in. After you rescue her, she will be in the Nexus.

She teaches you advanced dark magic by using Demon's Souls. See the Magic/Miracles section for a list.

If you somehow lost the Official's Cap , you can kill Yuria using Firebomb, throwing them close to the first window upstairs where she is, without having to lower the staircase. Eventually she will become hostile and will walk to the edge, and from there it can also be attacked by arrows. (Credit: HiltonGorg)

It is implied that witches were rounded up and executed by the Fat Officials during their siege on Boletarian Palace, due to the remains of Stockpile Thomas' wife and daughter holding Spice. Yuria was similarly imprisoned for her use of magic, although she states that she came from outside Boletaria to seek the power of Demon Souls. Upon seeing their terrible power, she changed her mind and no longer seeks them.

All of Yuria's spells are designed to directly copy the magic used by the demons. This is different than Sage Freke, who seems to interpret the spell to his view of what it should be like. 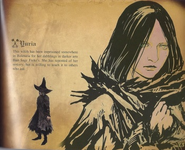