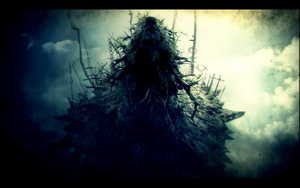 "From where does that howl come? That is no demon. It sounds more like a poor hungry child."
- Saint Urbain

The Old One is an ancient demonic entity and the main antagonist of Demon's Souls.

The Old One takes on the form of a colossal serpentine creature made out of trees and other plant matter. It is many times larger than the Slayer of Demons, the visible part of it being comparable in size to the bridge in front of the Boletarian Palace, where the Archstone of the Small King is located. It appears on a beach in the middle of a vast desert, which is only accessible from the Nexus once the player slays all five Archdemons and talks to the Maiden in Black. It has no facial features other than a circular mouth, inside of which is a passage leading to a small pond which contains the remains of King Allant XII and what appears to be the Old One's, "soul," or, "brain."

The Old One is the original demon, and the originator of all their kind. The origins of the Old One are not known, alternatively referred to as an irrevocable poison and a merciful gift from God to end the pain of living. The old one is the ultimate source of power for the Soul Arts, the use of which inevitably resulting in its awakening.

The Old One creates Demons, inhumanly powerful beings who exist to consume the souls of the living. These Demons in turn feed the endless hunger of their master. The colorless Deep Fog is the result of this, and left unchecked, the Old One will cause the world to cease to exist, with every life upon it.

The description of the Talisman of Beasts suggests that The Old One is, in fact, the true form of the God that is worshipped by Saint Urbain, his followers and others, which would imply that the Old One is also the source of the miracles they use.

The Old One cannot be slain in a meaningful sense; merely lured back into its slumber until the usage of the Soul Arts stirs it once more.

The Old One appears in all of the possible conclusions to the story, and its ultimate fate is determined by the actions of the Slayer of Demons.