Patches the Hyena is a character in Demon's Souls.

Players usually first encounter him in Tunnel City (2-2), where he will direct you to a supposedly valuable treasure (actually just a Club) that is underneath a giant Bearbug. Either kill the Bearbug, or do the easier method of falling for the trap and escaping by breaking the boxes to the left of the Bearbug. If the latter is done, he will run upstairs and grab what is otherwise an item pickup to give to you as the "treasure". He will then appear in The Nexus, claiming to have reformed. While some of his items are ludicrously expensive, he sells the cheapest healing grass in the game, so it is advisable not to kill him.

He will eventually vanish again, and go to the Shrine of Storms (4-2), where he will kick the player down a hole close by in an attempt to kill the player. This allows the player to rescue Saint Urbain (although falling in the hole yourself doesn't do that much damage regardless).


Well, what jolly travelling companions are we? Pleased to meet you; call me Patches.
Oh, see that treasure over there? Go on and take it! My gift to you, just to show that we're friends.
Phew, I'm glad to meet you. These soul starved imbeciles will drive you mad.

(If you met him before)

“Oh, hello again.”
Hey, don't turn a cold shoulder. I didn't mean to do you wrong, really!
O, I have an idea! That treasure over there should be mine, but I'll let YOU have it!
I promise, no tricks! I won't move a muscle until the treasure's safely in your hands.
You can trust me… can't you? I'm just trying to do right and make amends here, hmm?

(If you take item) 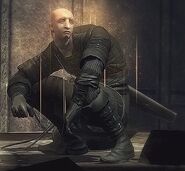