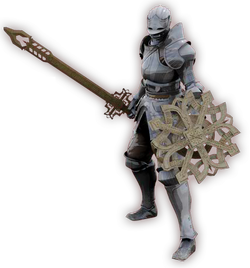 Ostrava of Boletaria is a character in Demon's Souls.

Ostrava is first found in 1-1 on a platform above some Dreglings. When talked to, he will ask the player to kill them. Upon doing so he will drop down and stand where they once were. Talking to him now will net the player the Brass Telescope. After talking to him, he will start to patrol the surrounding area and kill the enemies.

He will move to 1-2 after the defeat of the Phalanx. Here he will be cornered by some Dreglings and Boletarian Soldiers. He can be talked to through the portcullis in the very first room of the area, where he will request the player's help. After being rescued, he will give the player 3 Dark Moon Grass as thanks and will then patrol the area.

He can be found in 1-3, being attacked by Red Eye Knights.

He is finally encountered in 1-4 in the hall just after the Blue Dragon. He will tell the player to seek out Old King Doran and gives the player the Mausoleum Key. He then dies from his wounds, or possibly kills himself, before he reappears at the end of the hall, as a Black Phantom.

If Ostrava is encountered in 1-1 or 1-2 he won't be much of a fight, it is easy to utilize nearby enemies like Blue-Eye Knights to kill him single-handedly or even letting him kill groups of dreglings. Players can easily backstab him repeatedly without much retaliation or finish him off after he has killed an enemy by himself. During 1-2 Ostrava will increase slightly in health and damage and during 1-3, 1-4 Ostrava will have become stronger than he did in 1-1 and may even fight back if prompted.

Killing Ostrava can be a bit tricky. Players are more likely to kill Ostrava in 1-2 because of the need to kill the Phalanx boss and level up. If players manage to get Pure Black Character Tendency and Mephistopheles spawns in the Nexus. Finding Ostrava in 1-2 may take some time and if Ostrava has already commenced his patrols in 1-1 and players return, he is likely dead. If players manage to find him, it is likely an easy kill as players can lure him or enemies to attack the other but, players must deal the killing blow, or it will not count as an assassination.

If player takes the normal path to him: "Help me! I am trapped; surrounded by dreglings!"

Jumping down to him: "That was a bold leap! A surprise indeed! Well, now that you are here, pray thee, fend off these dreglings."

After being saved: "My thanks for your brave rescue. I am Ostrava of Boletaria. Accept this as a token of my gratitude."

Talk x2: "No matter how far I venture, only the soul-starved remain. Is there a single sane person left in Boletaria?"

Attacked after rescue: "What on earth are you doing?! You mustn't! I thought we were allies!"

Attacked before rescue: "What on earth are you doing?!"

Inside the Nexus after saving: "Before the blight, Boletaria was a grand kingdom. The king, his knights, and his subjects were modest and plain, but also steadfast and compassionate. I have spent much time in my studies in the cultured countries of the south, yet no country holds my heart as does Boletaria. But look at what has become of us now! I refuse to believe that this is what Father wished for our great land..."

Finding him behind the gate: "Hello! You yonder! Over here! It's me, Ostrava! Look at me, again fenced in by enemies. Could you assist me one last time? Clear out the soldiers blocking this passage, if it please you. The Lord's Path, just over there, is now a feeding ground for dragons. Have your wits about you."

After clearing the area: "Thank you. That's twice now. Time to forge ahead. This is a token of my gratitude. Please accept it."

Inside the Nexus after saving: "Here in Boletaria, we speak of the legend of The Two Swords and the Solitary Hero. The two swords are Demonbrandt and Soulbrandt. One sword banishes that which befouls man, and the other banishes man himself. The Solitary Hero is Old King Doran. King Doran is the Everlasting One, founder of Boletaria, and protector of the two swords. Ha ha, of couse, only according to legend! But in the dark state of our land, sometimes legends are all we have..."

After opening the gate: "Thank you for rescuing me."

In the alley after killing Red Eye Knights: "You saved my life. This is the third time. I am truly indebted to you. This is...all I have, but please accept it. Now, I must go. My father the King awaits me."

Inside the Nexus after saving: "King Allant led Boletaria with a round table of the bravest knights. The noble Twin Fangs, Vallarfax and Biorr, Alfred, the Tower Knight, Metas, the Penetrator, and the brave tribesman Long Bow Oolan and his fearsome legions. But today Boletaria is an abysmal mess. Vallarfax was lost, and Biorr slipped through the fissure, never to be heard from again. All the rest, along with Boletaria, are either devoured by the fog or fallen afoul of the demons. The Boletarian knights are no longer. But perhaps our age will see the rise of new heroes, such as yourself."

At the staircase: "Oh, it's you, is it? My father is up above. Ha ha, well, something like him, anyway. A demon in his shape. I began this quest to ask my father his reasons, to drag him back to the path of righteousness... But it seems it was all in vain. Please kill my father. In his depraved state, he can only bring peril to these lands. This key...opens Boletaria's mausoleum. Inside the mausoleum lies father's sword, the Demonbrandt, twin of Soulbrandt. Use it to bring an end to his madness."

The name 'Ostrava' is actually an alias. Ostrava's true name is Ariona Allant, and he is the son of King Allant. He previously lived with his uncle, Lord Rydell (who is also known as 'Little Allant') somewhere within the southern kingdom of Latria.

Ariona/Ostrava braved the fog on his own and has returned to Boletaria in order to dispel the rumors that his father is a demon whilst also investigating whether there is any validity to these rumors. He travels in typical Latrian armor, the Fluted Set. He also carries the weapon and shield of a Latrian hero (the Rune Shield and Rune Sword). He is described as a wise and kind soul, albeit pampered, by others and often finds himself in dangerous situations where he is overwhelmed and surrounded by enemies and in need of aid. Throughout his quest line, the player will encounter him in those unsavory situations. Each time he is saved, Ostrava divulges more about his mission for the truth about his father and his homeland. His search is ill-fated however, and he soon finds that Boletaria has changed dramatically since his return.

His journey ends when Ostrava comes to the castle and encounters the Demonic False King Allant. He is either defeated by the demon or leaves immediately and rests upon the stairs to the castle until the arrival of the player. He was most likely defeated by the demon he assumed to be his father, or, as some interpret it, committed suicide, believing his father had become a demon and entrusts the player to finish the job. Ostrava is only slightly correct; his father had indeed become a demon, but the 'man' he met was simply a creation of his father. He dies without knowing the whole truth and gives the player the key to Old King Doran.

Following his death, Ostrava appears as a black phantom at the end of the hall just within the entrance of the King's Tower as the last obstacle to King Allant. Upon killing him, he drops his Rune Shield and Rune Sword. 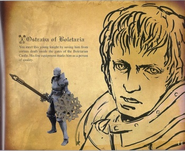 Ostrava in the Nexus (Remake)