Old King Allant is the final boss of the Boletarian Palace area in Demon's Souls.

This boss is a dangerous opponent. He typically uses attacks in rapid succession. His weapon is the Soulbrandt. This boss will prove to be one of the more difficult archdemons.

He tends to attack in rapid succession and the only breathing space the player will get is after he uses one of his stronger attacks, which requires Old King Allant to pause for a brief moment before attacking again. A notable way to heal is by dodging his lunge attack and then consuming an item before he recovers.

Old King Allant's signature move, "Soul Drain", deals a high amount of damage on the player as well as removing the last stat point gained and reducing the user's Soul Level by one. Soul Drain is a fast attack, usually used at mid to close range but can be dodged with a roll to the side if timed right. His weapon, the Soulbrandt, isn't obtained after killing him in the first battle. The sword is only obtained after completely killing King Allant. Old King Allant's weapon deals very high damage.

Ostrava of Boletaria, his son, was searching for him and after being severely wounded by the demon impersonating his father. Ostrava gave the Mausoleum Key to the Slayer of Demons so that the hero could free Old king Doran and get the legendary sword, Demonbrandt, to kill Allant and save Boletaria.

Allant, driven by a lust for power, became a demon after he made a pact with The Old One. This boss is known as the 'False King' because it is not the real Allant. After Allant allied with the Old One, he was given immense power. Using this power, he fashioned a demon made in his own image, made to look like his old self at the height of his power. This demon would lead the demon armies against Boletaria. 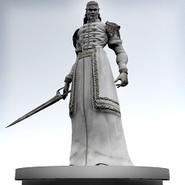