Maiden Astraea is a boss in Demon's Souls.

"She is a pure soul who has gone into the Valley of Defilement to help the wretched and the suffering who dwell there. Neither she, nor her bodyguard Garl Vinland have been seen since they entered the fog."

She is a tall, blonde lady who works to help the plague stricken and disease affected inhabitants of the Valley of Defilement. When the Slayer of Demons finds her, she is perched helplessly on a rock, wrought with the plague and her clothes deeply stained by blood and swamp water. Her bodyguard, Garl Vinland, is one of her only forms of offense and defense, alongside her own unique version of the miracle God's Wrath.

Astraea is the Sixth Saint of the Church, and has set out on a pilgrimage to the Valley of Defilment in order to care for those who are suffering there.

Journeying alongside Astraea is Garl Vinland, her most trusted bodyguard and companion.

While the fight requires Maiden Astraea to be killed, she doesn't attack. Instead, her loyal guardian, Garl Vinland is fought in her place. When entering, Garl will block the shortcut to Astraea, forcing you to either take a longer route (highly recommended) or wade through monster ridden, plague infested swamp land (almost certain death or near impossible). When you fight Garl, he will be on a small island, which presents a problem as his weapon, Bramd, will deal dangerous amounts of damage and the tight space makes dodging it a problem.

After Garl is dead, Astraea can be approached and spoken to, and then proceeds to kill herself after a brief dialogue. Another way to end the fight is to snipe Astraea with arrows or spells, and if you can out damage her healing, she will die, and Garl will be pacified unless he is attacked. If using this method, Garl's equipment can be acquired by reloading.

If one attacks her, however, instead of talking to her, she will charge up and release a smaller, but still significant, variation of the miracle, God's Wrath, which deals high damage and usually either staggers or knocks one down.

The name, "Astraea," translates to, "star-maiden," or, "Starry Night," in ancient Greek. 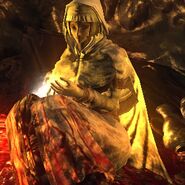 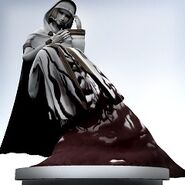