"Since ancient times, a fire demon has been sealed in an underground temple filled with dragon bones."

The Flamelurker is a boss in Demon's Souls.

Trapped deep inside the Stonefang Tunnel, the Flamelurker is a hulking one-eyed humanoid demon completely covered with fire with powerful claws capable of emitting energy shockwaves. It can also leap for a very long distances to hit its target with a double hand smash. It usually roars before it attacks and, when wounded, jumps back, leaving fiery footprints in front of him.

The Flamelurker is very weak to magic, so a weapon that deals magic damage can help a lot. The Crescent Falchion found in 4-1 or Sticky White Stuff are good options if the player doesn't have access to buff spells or Ed. 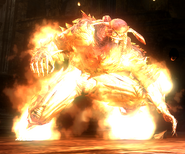 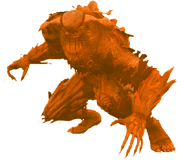 The Flamelurker in the remake.
Русский
Community content is available under CC-BY-SA unless otherwise noted.
Advertisement