Fat Official (also known as Fat Minister) is an enemy in Demon's Souls. They can be found in the Boletarian Palace and in Stonefang Tunnel.

Demons in the form of obese, gray-skinned men whose faces are perpetually wrinkled with wide, black-toothed grins. Nevertheless, they dress in rich black and gold outfits and carry whips and large two-handed gisarmes, symbols of their ruthless authority. They frequently emit a deep, distinctive chuckle, even while dying.

This variety may attack with a slow vertical or horizontal crack of the whip, or by casting Flame Toss (at long range) or Ignite (at close range). Its whip attacks can be parried. Although it is not as strong as the Palace Officials, it has significantly higher HP than any of the Scale Miners it oversees, and lacks a distinct weakness to piercing or magic damage. This variety has particularly sharp senses; characters not equipped with the Thief's Ring or Cloak would do well to carefully watch their surroundings in case they come under fire from a distant Fat Official. Upon death, it may drop Late Moon Grass or (very rarely) a Crescent Axe.

This variety may attack with a diagonal chop and overhead chop, or a leaping chop, in addition to Flame Toss and Ignite. They have much higher HP and attack damage than the Stonefang Officials, but generally rely less on ranged combat. A few of them in the third section of the Boletarian Palace, beyond the Tower Knight Archstone, carry special items that are guaranteed to drop upon death:

All of them may drop a Crescent Axe or Full Moon Grass upon death. 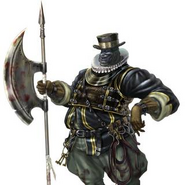 A Fat Official who dies being stabbed by the Penetrator, still laughing as he falls. 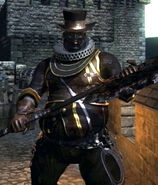