Biorr of the Twin Fangs 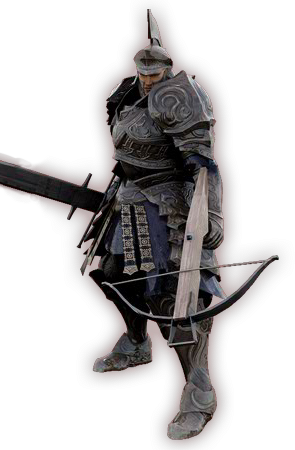 Biorr of the Twin Fangs is a character in Demon's Souls.

Biorr and Vallarfax formed King Allant's greatest warriors: the duo known as the Twin Fangs. Their Brushwood Armour made their defence nearly impenetrable, and they possessed great strength to wear their armour. Biorr is a formidable opponent and swears loyalty to the King. But with a False King on the throne, Biorr is imprisoned and awaits his fate.

Biorr can initially be found in a jail cell in 1-2, but he can only be seen and the door opened if the player obtains the key in 1-3. When he is rescued he will engage the Fat Official nearby if the player has not killed him yet, agrees to reward the player later on, and falls asleep in front of the player.

If the player has freed Biorr and enters the fog door to fight the Penetrator in 1-3, Biorr shall arrive to help the player. Even though he has a great amount of health and admirable defenses, Biorr is unable to solo the boss without the player's help defeating the Penetrator itself.

If the player agrees to help Mephistopheles assassinate Biorr, Biorr will be found in his usual place in 1-2. Due to Biorr's large amount of health, high stamina, great defense and high damage, Biorr is a high risk target to kill. He drops the Brushwood Set, (which has some of the best defenses in the game), his Large Brushwood Shield and his Ring of Great Strength.

Biorr in the Nexus (Remake)

Biorr in the Nexus (Remake)
Русский
Community content is available under CC-BY-SA unless otherwise noted.
Advertisement